Attending a wedding for the first time, a little girl whispered to her mother, "Why is the bride dressed in white?" "Because white is the color of happiness, and today is the happiest day of her life," her mother tried to explain, keeping it simple. The child thought about this for a moment, then said, "So why's the groom wearing black?"

The groom in today’s Gospel reading John 2:1-11)  may not have been wearing black but he was probably having a dark moment when the wine ran out at his own wedding but thanks to Jesus all is well and the celebrations continue and he even gets the credit for saving the best wine till last!  Shaky start or not it all ends on a happy note when a scarcity becomes an abundance.
And this is not just a story about Jesus performing what some would describe as magic trick – No, the text tells us that this is a sign, the first of his signs which revealed his glory and brought people to faith in him.

And its not an isolated incident either – it is in fact reflective of the generosity and mercy of God in providing for us in our times of need.
The Old Testament reading  from Isaiah (62:1-5) is very similar in its structure – It begins in the wake of pain and shattered dreams in the wake of the Babylonian Exile and the return to the site of destruction that was Jerusalem – In the midst of acknowledging this pain the Prophet promises a new reality, a new hope on the horizon:
The nations shall see your vindication,
and all the kings your glory;
and you shall be called by a new name
that the mouth of the Lord will give.
And then in language that is echoed in the Gospel reading we hear this description of the new relationship between God and his people:
For as a young man marries a young woman,
so shall your builder* marry you,
and as the bridegroom rejoices over the bride,
so shall your God rejoice over you.

And just like the Gospel where scarcity becomes abundance we hear these words:

All mortal flesh shall take refuge
under the shadow of your wings.
They shall be satisfied with the abundance of your house; •
they shall drink from the river of your delights.

Very clearly he is saying that these gifts are not about feeding our own egos but building up the Church, the body of Christ. These gifts are complementary and not to be seen as a hierarchy of gifts but given individually to the members for the sake of the whole – and everybody has got one – nobody is left out – the abundance of gifts belong to all and so the generosity and Grace of God is experienced in community primarily.
Being a follower of Jesus is not about solo runs!

And so back to that Gospel and as we have already noted it is about the generosity of God’s provision for his people but in this case the abundance of that generosity is quite extraordinary. 6 * 20 or 30 gallon water jars filled with wine amounts to as much as 1000 bottles of wine!!  That is totally over the top – there must have been some very sore heads in Cana of Galilee after that wedding.
But in saying that, God’s love for us and his provision for us is way over the top – more than we can ever earn or fully appreciate. Some of the best attempts at expressing it have been in some of the great hymns of our tradition such as Amazing Grace – the title says it all and How Great thou art which opens with the line: O Lord my God! When I in awesome wonder!
But its not only about the extent of God’s Grace – it is also about its eternal quality – it doesn’t come to an end – there is always more – there is always grounds for hope and for renewal.  After the miracle at the steward comes to the bridegroom and says:
‘Everyone serves the good wine first, and then the inferior wine after the guests have become drunk. But you have kept the good wine until now.’

We are called to be a people who never give up hoping – who never stop expecting that God is going to do something wonderful in our lives  - it is not a life without hurt and pain – there will be valleys as well as mountain tops but that does not need to undermine our capacity to experience God’s presence throughout some of the most difficult patches of our lives.

I personally find great hope and inspiration in the writing of a Jewish Rabbi, Harold Kushner who wrote what is almost universally recognised as the greatest book on living with grief in modern times. It is called ‘When bad things happen to good people’, written in response to the death of his young son from a rare illness, and this passage is I think especially relevant:
QUOTE: 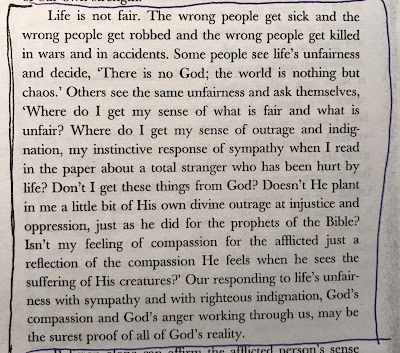 It is that reality that gives me hope – it is that reality that has helped me through the darker times in my life – God for me isn’t a God who comes to the rescue when it all falls apart but God is there too when it is falling apart and as long as I or we or you can discern that presence there is a tomorrow and there is the possibility to begin again, to hope again. The best wine is yet to be served.

Last Tuesday was Martin Luther King Day and I can think of no better words than his to speak of that Hope – These were his last words delivered in a sermon in in on the eve of his assassination:

Well, I don't know what will happen now. We've got some difficult days ahead.
But it really doesn't matter with me now, because I've been to the mountaintop. And I don't mind. Like anybody, I would like to live - a long life; longevity has its place. But I'm not concerned about that now. I just want to do God's will. And He's allowed me to go up to the mountain. And I've looked over. And I've seen the Promised Land. I may not get there with you. But I want you to know tonight, that we, as a people, will get to the Promised Land. So I'm happy, tonight. I'm not worried about anything. I'm not fearing any man. Mine eyes have seen the glory of the coming of the Lord.