If you happen to be in Moneygall on Election Night 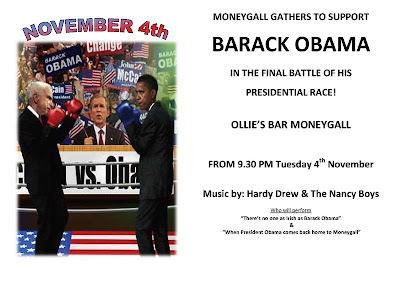 I'll be there! Make sure you are too!

Click HERE to see the first major US coverage of the story back in early 2007
Posted by Stephen Neill at 23:16 6 comments:

Why we shouldn't give benefits to those who don't need them!

A cry for help!
Not unrelated to the ongoing medical card debacle - Read this and tell me that giving medical cards to wealthy pensioners is justifiable in a time of limited resources - In the face of real need such as this we need to target resources to where they are needed.
Posted by Stephen Neill at 23:31 4 comments:

The Horse at the end of the Rainbow! 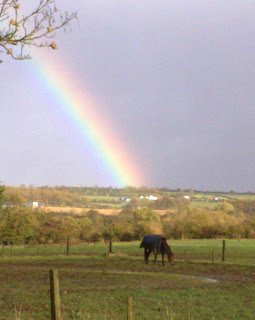 Just saw this interesting sight on arriving home this afternoon. (Not a great pic as taken with camera-phone) The horse is in the field next door to my house - Incidentally in this same field the great Danoli, former winner of Cheltenham was born and was ridden by my other neighbour Charlie Swan.  I wonder is this a sign of future greatness - Not a betting man me, but one would almost be tempted to have a flutter next time he runs.
Posted by Stephen Neill at 15:42 8 comments:

Suggestion for Medical Card Means Test – And a Postscript

Now that it seems certain that we are to have means testing for medical cards for the over 70s I thought I might suggest the following (which was in a round about way inspired by this post from Grannymar) to make the experience as simple and painless as possible.  After all if we are to believe various reports, once we hit 70 we spontaneously loose all our faculties and become blubbering eejits wandering around terrified of anything that involves putting  pen to paper.

So what can we do to spare our poor helpless pensioners from the government’s latest tool of oppression, the medical card means test form, soon to be released into the wild?  There is an alternative and it is not just for the sake of the pensioners that we should be glad of it – Can our capital city withstand another attack by the Grey Panthers? The debris is still being cleared up from the storming of the Dail.  The remains of improvised weapons made from zimmer frames, false teeth and knicker elastic litter our streets.  St Andrew’s Church on Westland Row is being re-consecrated after the shocking behaviour of our senior citizens who had the audacity to use the Church for political ends! (Nobody has ever done that before – have they?)

This is the alternative: The two Brians will go on an all-Ireland tour where they will grab all our senior citizens by the ankles and turn them upside down and shake vigorously!  Using a previously prepared formula, based on the contents of the pockets of each pensioner they will determine their eligibility for THE CARD.  Any evidence of foreign travel (an unnecessary luxury), such as non-Irish Euro coins will mean instant disqualification.  Any pensioner with one cent coins will also face disqualification, as the ability to pick these up off any surface known to humanity is indicative of a dexterity and fitness most gymnasts could only dream of!  Pills will also mean no card – we certainly don’t want to give the card to druggies! Where tissues are found in a pensioners pocket a very dim view will be taken and unless evidence of a medical allergy to Lidyl’s budget 1 ply toilet roll can be produced this will usually result in refusal.  Though this process will cause temporary discomfort and a rush of blood to the head it will be less stressful than the ordeal of filling out the proposed means test form.   And like the proposed means test the ratio of 20:1 will be preserved, the only difference being that only one in twenty will qualify! Now isn’t that much better?

What the government did re the Medical Cards was monumentally clumsy and stupid!  For a very small financial saving the government have lost all the political capital and credibility they had. However I think common sense would say that the universal medical card for 70+ should never have been introduced. It was a cynical ploy to buy an election and poor stewardship of the nations resources no matter how well off we thought we were!  People are too angry at the moment to listen to reason and I think the Grey Panther march yesterday was about more than medical cards - I think it was more about a sector of the population who are increasingly invisible in our rapidly changing and disconnected society. However there are better ways of making them visible than giving free medical care to those who can easily afford it themselves. There is a lot of talk about rights, but our rights are of necessity affected and circumscribed by the rights of others who also deserve a piece of a shrinking economic pie. There is scandalous wastage in our welfare and health delivery systems and these need to be addressed but the reality is that if we give out free medical cards to the wealthy there will be less beds in our hospitals and less resources to help those who are really needy and marginalized.  Taken to its extreme people who need resources will die if some of these resources are given to those who don’t need them. If we all got what we deserved we might have even more to complain about!

UPDATE: Check out the excellent editorial in the Irish Times (Saturday 25th October) which puts all of this in its proper context.

Of Rupees and Rockets 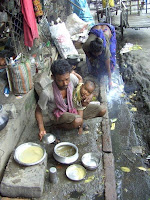 today.  My first reaction was bemusement but on reflection and reading the contributions on the debate 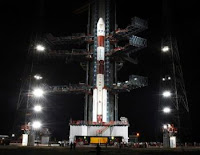 I think it raises questions that need to be answered by the Indian government and charities that continually pour aid into India. Are we subsidizing the Indian economy to feed the hungry or to fuel moon rockets? Whatever about medical cards for the over 70s (this is a major issue in Ireland at the moment), Lunar missions definitely fall under the category of 'luxury items'. Apparently dissenting voices are being raised in India about the government's economic priorities. We only give creedance to the government's skewed priorities by continuing to pump aid into a seemingly unceasing pit of despair. If the government of India puts money into space rockets instead of vital infrastructure this will only continue and the people will be perpetual victims instead of shapers of their own destiny.
Posted by Stephen Neill at 16:12 1 comment:

Part of me says No! Don't share this! Why am I uncomfortable with this?

I think the problem I have with this is the idea that God might intervene in trivia while ignoring global pain and injustice but it still makes me stop and think
Posted by Stephen Neill at 00:06 4 comments:

Zimbawbe - Why are we letting this happen?

Posted by Stephen Neill at 23:18 No comments:


Incidentally this parish can also claim President Bartlet as one of its sons. His mother hails from Borrisokane!
Posted by Stephen Neill at 18:02 No comments:

A Sunday Night in Cloughjordan

Went out to a Liam Lawton concert last night! I have to confess I would not have gone had I not been peripherally involved in the organization of it and were it not on my own doorstep in the Roman Catholic Church in Cloughjordan. It was a fundraiser for two very worthy charities: Breast Cancer Research and Suicide Awareness, both issues that touch far too many peoples lives. Well it was simply superb! The way he wove his story and the stories of the songs through the evening was both moving and entertaining. It was very simple set up, Liam and one musician on keyboards and another on guitar. Here he is singing one of his more beautiful compositions: Cloud's Veil


During the evening he introduced as his guest Fionnuala Gill, who played the harp beautifully and sang hauntingly. A former lead female vocalist with Riverdance, member of Seret Garden and founder member of Anuna She is being feted as the new Enya - I think she is actually better and that's saying a lot. Check her out on itunes or see her in an impromptu performance below on Dublin's Balcony TV:


I had supper with them afterwards and a more down-to-earth bunch it would be hard to find - not a Diva to be seen!
Posted by Stephen Neill at 12:11 No comments:

This is not only side-splittingly funny but a revelation as to the statesmanship of one John McCain.

Posted by Stephen Neill at 21:07 No comments:

Everyone wants a piece of Obama!

Haven’t blogged in a while but one of the things that really gets me riled is injustice. The whole Moneygall Obama link has been given a shot in the arm by the inspired music and lyrics of Hardy Drew and the Nancy Boys who penned the iconic song “There’s no one as Irish as Barack Obama”. The lads aka the Corrigan Brothers, Ger, Brian and Donny hail from Limerick and have performed their song in Moneygall, Co. Offaly the Irish home of Barack Obama.
However, after all their hard work and artistic expertise someone else is gaining all the credit. Shay Black who is based in the US wrote a few additional verses and has been inadvertently credited with writing the tune. In an election where so much is at stake don’t let the lads from Limerick be dispossessed of their contribution to the success of Barack Obama. Every vote counts and the lads deserve the credit for this potential classic.
Check out their video below: