This is very very weird - Reuben is a old friend of mine who is an alternative comedian/magician/children's entertainer and this is his next project!

The current dispute between Aer Lingus and the lucky customers who purchased €5 business class flights to the US via their website has implications which reach far beyond the current situation. It is patently obvious that Aer Lingus hasn't got a leg to stand on (a wing to fly on) as there was a legally binding contract in place as soon as they accepted payment for the €5 flights on their website. It is irrelevant whether the offering was a mistake or not! The offer was made and accepted and money changed hands - Case closed!  Hopefully the airline will fulfill the contracts made with the customers concerned but if not this looks like the ideal opportunity for a very costly class action which the airline will most certainly lose.

A much more serious situation will result however if the airline does not back down and if customers let them away with it!  Contract law in this jurisdiction will be effectively worthless! Every time a party wants out of a contract all they will have to do is say "I didn't mean it - I was only joking - April Fool!" As anyone knows April Fools after the 1st April are invalid!  I think it might actually be desirable that this does go to court regardless of Aer Lingus' response. Serious damage has already been done when a major company like Aer Lingus shows such blatent contempt for the law of the land!  Consumer law is one of the vital protections within any civil society and any organisation that seeks to subvert it should face the consequences! If Aer Lingus walk away from this with only a telling off Justice will have been severly diminished!

Changed my Religion - Mac is back!

Just once too often I have looked into the abyss that is the 'blue screen of death'! My PC is on borrowed time as it perches precariously on the edge of my desk; its former position in the middle of my desk now occupied by an iMac. As soon as I can get all my 'stuff' transferred I will gently nudge the PC over the edge!

Funnily enough I started my computing life on a Mac Classic – the original one box machine. It was a joint purchase with Nicola (My wife), made I think before we were even engaged! So in a sense our relationship was sealed by an Apple - Sounds quite Biblical :-) I should never have apostasized to the wicked empire of Windows but the arrival of the hames that is Vista woke me up from my Microsoft induced stupor and I saw the light! Just goes to show it is never to late to be converted to the Truth! ;-) I am now working on Nicola and pray that she too can be saved! ;-)

Incidentally for all fellow nerds, when I was transferring data from the PC to the Mac via ethernet I noticed that the icon the Mac uses to represent the PC is a PC monitor displaying the "blue screen of death" - I love the humour. This apparently was a recent addition with the Leopard OS. The PC is proving reluctant to give up some of my critical data in an intellgible form but I think I now have it beat - I think it knows that this is all that stands between it and the local recycling centre! ;-)

So friends - If I happen to bump into you in blogland or even reality and I ask you: "Are you saved?" you know what you need to do! Repent and be Mactized!
Posted by Stephen Neill at 10:07 5 comments:

Obama - Gone to the dogs! 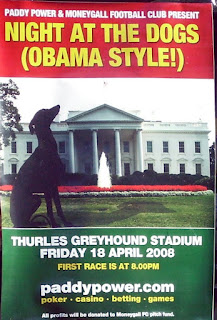 As you will see from this poster the people of Moneygall have really taken Barack Obama to their heart :-)
Posted by Stephen Neill at 10:41 No comments:

Living Dangerously in a Safe World!

An Easter Vestry is as good a time as any to look at how we are being the Body of Christ and indeed where we fall short and miss the mark.  And of course it is a time to consider how we could do better.  So I want to bring us back to today’s Gospel and isolate a few verses from the end of that story of The Emmaus Road:

“As they came near the village to which they were going, he walked ahead as if he were going on………….'Stay with us, because it is almost evening and the day is now nearly over.' ………When he was at the table with them, he took bread, blessed and broke it, and gave it to them. Then their eyes were opened, and they recognized him; and he vanished from their sight………That same hour they got up and returned to Jerusalem; and they found the eleven and their companions gathered together. ……………they told what had happened on the road, and how he had been made known to them in the breaking of the bread.”

A familiar story and the danger with familiar stories is that they wash over us and we don’t really hear them.  They become like background noise or elevator music – its there but we don’t really engage with it.  And that is a shame because this story has a radical message for us:

Two disciples are on the road from to Emmaus…they meet this man who appears to know little of the events of Jesus death, but yet interprets the Scriptures relating to Jesus.  As they approach the village it seems the man is not going to stop and so because it is late they urge him to stay with them.  'Stay with us, because it is almost evening and the day is now nearly over.'   Probably for safety more than anything else. He does and subsequently they recognise him in the breaking of bread! And then what? He vanishes! And what do they do? They go out, despite the lateness of the hour and they go to their communities and share their extraordinary news! “they told what had happened on the road, and how he had been made known to them in the breaking of the bread.”

On one level this is a story but it is also instruction in discipleship which we badly need:  Jesus is not inclined to stop and seek comfort and safety … the disciples are different….they find safety and security and invite Jesus to share it with them…..this he does but only for a short time…..until they realise who he is, through his actions (in breaking the bread), significantly not in his previous exposition of the Scriptures but rather through his actions! And then he moves on…..not just moves on.. He vanishes!

And how do they respond? They leave the safety and security of this house and go out into the night to spread the news! No longer concerned for their own personal safety and security they go back to their community and “told what had happened on the road, and how he had been made known to them in the breaking of the bread.”

If that makes you feel uncomfortable, it should do – It should make all of us feel uncomfortable and yet that is exactly the way we in the Church today are inclined to respond to Jesus teaching on discipleship. It’s not for us!   As Dallas Willard, the author of  “The Great Omission” said: “The last command Jesus gave the church before he ascended to heaven was the Great Commission, the call for Christians to “make disciples of all nations”. But Christians have responded by making Christians not disciples”  This in Willard’s view, has been the Church’s Great Omission.

Apparently, because someone has counted, not me; The word “disciple” occurs 269 times in the New Testament while the word “Christian” only occurs 3 times and then as a description of the disciples of Christ.  Should that be telling us something?   And what is a disciple? A disciple according to Willard (and Jesus incidentally) is someone who acts. They are a “learner, a student, an apprentice but most importantly a practitioner, even if only a beginner….people who do not just profess certain views as their own but apply their growing understanding of life in the Kingdom of Heaven to every aspect of their life on earth.” Jesus did not call us to set up churches and sit in them but rather to build camps or bases from which we move out! We are called in what sounds like a contradiction to break camp, to “break out of the churches” in order to be the Church!  Willard himself comments that “most problems in contemporary churches can be explained by the fact that members have never decided to follow Christ." We have never broken camp!

The question we have to ask ourselves today is this: Are we about making disciples or are we running a multi-national corporation?  It seems to me that the message of the Gospel is clear – Jesus never intended us to stand still – to sit in comfortable spaces – to seek safety and security – but rather to go out into the night and bring the light of Christ into dark places. To obey his call as did the disciples to “FOLLOW ME!”

Sometimes we make following Jesus so complicated and dress it up in so much talk that we miss the obvious solution: “When all else fails, follow the instructions” or as it is sometimes abbreviated: RTFM!

And how do we respond to these instructions ? How do we “Go and make disciples of all nations”? Do we convert the World? Do we convert the Church? Or do we convert ourselves? For an answer we need look no further than our lesson from Acts chapter 2; Peter’s speech on the day of Pentecost.  The crowd ask Peter in response to his proclamation; “'Brothers, what should we do?' and Peter’s response is this:  'Repent, and be baptized every one of you in the name of Jesus Christ so that your sins may be forgiven; and you will receive the gift of the Holy Spirit. For the promise is for you, for your children, and for all who are far away, everyone whom the Lord our God calls to him.'

And the result of all this: So those who welcomed his message were baptized, and that day about three thousand persons were added.”   Not just 3000 people, not just 3000 Christians, but 3000 disciples!  And that question asked of Peter is one we are asking today, or if we’re not we should be: Brothers and Sisters, what should we do? If you’re looking to me for the answers you are going to be disappointed!  This is something that we can only discover through both looking at ourselves, and allowing ourselves to be converted to this path of true discipleship and also sharing and praying together to see where we as a community of faith are called to be in OUR call to discipleship.