Peace be with you - I don't think so!

A hard hitting look at how we relate to one another in church
- A wonderful song by Richard Stilgoe & Peter Skellern.
Be prepared to weep (with laughter).
Posted by Stephen Neill at 11:44 8 comments: 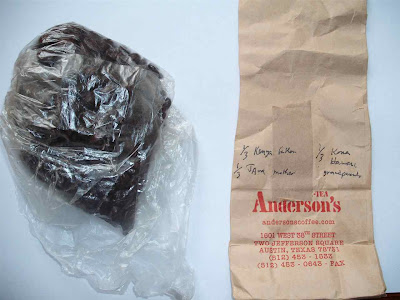 It was a parcel and I wasn't expecting it.....When I opened the brown padded envelope I knew straight away it was something a little bit different. At first I thought it was drugs and I was more than a little worried but then the aroma hit me: Coffee! And a wonderful blend at that. It was the "Inauguration blend" as created by Jamie Anderson of Austin, Texas to celebrate President Obama's ancestry. 1/3 Java, 1/3 Kenya, 1/3 Hawaii (Only missing the Irish!). It came courtesy of Jacqueline Clarke of Killiney, Co. Dublin who reckoned I would enjoy the blend. I am still savoring and anticipating the taste, not wanting to squander these precious beans. When I do I will post a sequel to this posting though no blog could capture the exquisite aroma of these beans.
Watch this space - And as the saying goes: 'Life is too short to drink bad coffee'.
Posted by Stephen Neill at 21:19 3 comments: 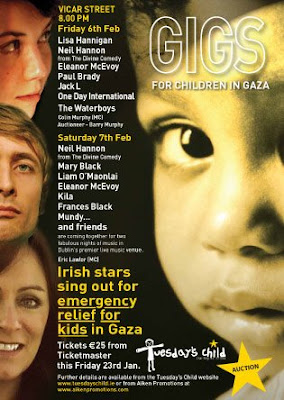 I meant to blog this earlier but its not too late to support this worthy cause. My brother Pete was official photographer and like all the artists gave his services for free. Make a donation or buy the album here.
Peter's pics from the event are here.
A few sample shots below: 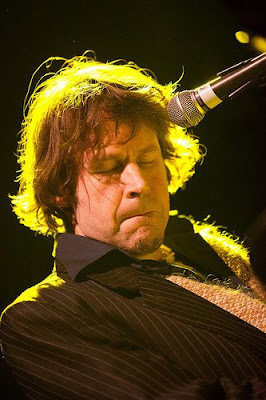 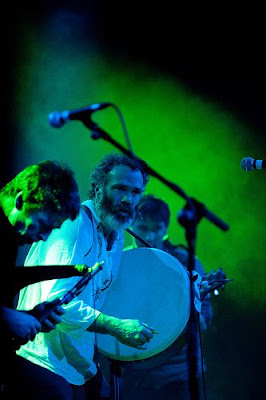 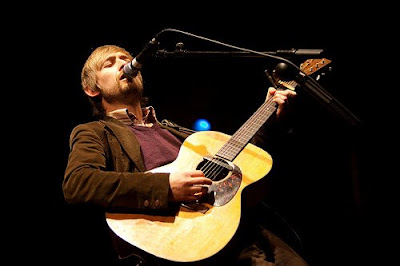 The election and inauguration of Barack Obama has reminded us all of the importance of strong and principled leadership and vision. In the technologically driven ‘open source’ model of cooperation and collaboration that has dispersed authority and power to the masses, we wrongly assumed that leaders were no longer necessary. Convinced of the ‘Wisdom of Crowds’ as James Surowiecki, financial columnist with the New Yorker, coined the phenomenon, we were happy to let the Markets determine our future, believing our own propaganda that they would keep us from harm. Now we know that we need leaders and very few stand comparison to the new US president.

In a world that was already cynical and dismissive of its political leaders, the qualities that Obama exudes only serve to highlight the deficit in others. The comparison is perhaps unfair but it is inevitable. The world is envious of America. In a time of international financial chaos they have a leader that most of their population and the rest of the world believes in and believes is fit for the task. They know that the system is broken and they know that they were part of the problem, but they also know that they are part of the solution.

Through his mastery of Internet communication, Obama and his campaign have involved and empowered the whole nation. Even as I write this article, as a subscriber to the Obama website, I have received (as have the tens of millions of Americans who subscribed) an email from the Obama administration telling me that in order to implement the recovery plan for the American economy : ‘I need your help to spread the word and build support.’ Obama knows how to build community and he knows that without community a leader cannot lead. A unified base is essential for a cohesive and inclusive vision to take hold. Without that people will not be inspired to look beyond their own immediate and selfish needs and desires. That is a large part of what is lacking in other parts of the world where politicians stress difference and division as key to their identity thus fracturing whatever unity exists. The most destructive and current manifestation of this is the blame game which projects all responsibility for the global financial crisis on the banks, the government, the employers and the unions to name but a few. It may be comforting to pass the buck but if we do not see ourselves as part of the problem then we will never be part of the solution.

Visiting Washington for the Inauguration one thing struck me very forcibly. In many of the people that I met, their joy and hope was tinged with a sense of shame for the behavior of the US government during the last eight years. One woman actually asked me to apologize to the Irish people for what her country had become! She was no Bush supporter so one might well say her angst was misplaced but she was part of a new community that the Obama campaign had built and nurtured, within which was created an understanding of the radical interdependence and relatedness of all the people of America. Through that experience she could not distance herself from what had gone before but neither could she disengage from her responsibility for the future.

The situation here is very different – Our politicians and other so called ‘leaders’ are still playing with the old rules despite the evidence of failure. Cheap shots and point scoring are the order of the day and even attempts to facilitate negotiation between employers, unions and other social partners are frustrated by adversarial posturing and a dogged determination by all sides to minimize their own exposure and pain. None of this is particularly surprising; It is the way people behave when there is no shared vision and no collective hope. We cannot simply tinker with the nuts and bolts of the economy and expect a different outcome. Unless we rebuild a sense of shared community and values in our land then we are doomed to failure. There is a necessary tension between Rights and Responsibilities that we as a nation have not yet grasped and will not grasp if we continue to focus on Rights and Wrongs!
Posted by Stephen Neill at 19:04 5 comments: