Celebrating a bigger vision of being Irish 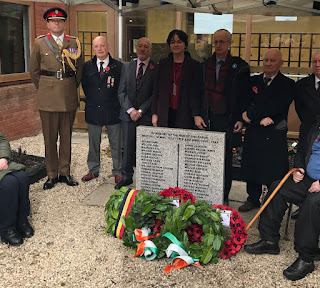 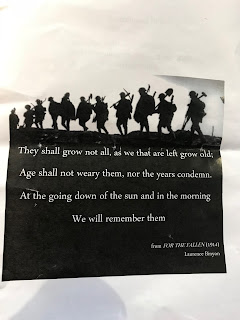 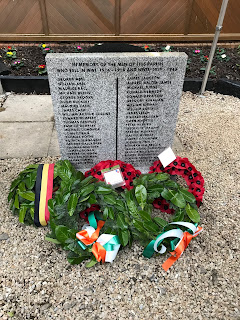 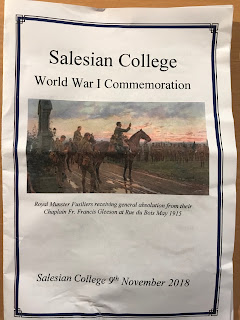 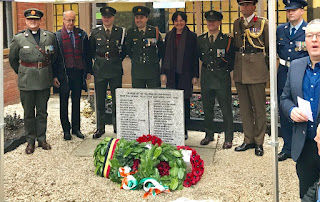 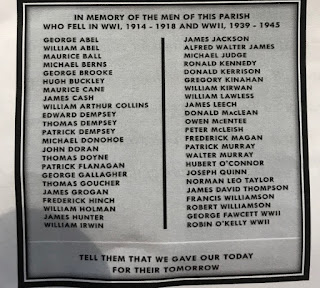 I attended an event today that moved me deeply and filled me with a sense of gratitude that I live in a country which is able to embrace an ever increasing diversity of understanding of what it is to be Irish.
The event was a World War 1 Commemoration of the 100th Anniversary of the Armistice and it took place in the in Celbridge and was organised by the staff and students of the college under the leadership of Kieran McManamon.
The centre piece of the event was the unveiling of a memorial stone in a newly set aside memorial garden to all those from the Celbridge area, regardless of religious affiliation who died during the 1st World War. Wreaths were laid by members of the Irish Army and Airforce and a senior British Army officer who was representing the British Ambassador. Also present was the Deputy Head of of the Belgian Embassy and a representative of the French embassy, who along with a representative of the Royal British Legion and students from the school  also laid wreaths. Following this a service took place in the School Gymnasium. This was led by Fr Seamus Madigan (Head Chaplain of the Irish Defence Forces).
The service was beautifully put together and included some of the most famous war poetry which was inspired by the 1st World War. The names of all those on the memorial were read out along with their regiments and also a list of others who while not from Celbridge were associated in any way with the staff and students of the school. I was very moved that my own Great Grand Father, Charles Arthur Cox  who died in the final weeks of the war was included in the list. I never knew him of course but found myself tearing up at his name being celebrated 100 years later in a context and setting he could never have dreamed were possible. (The account of his death is included below).*
The music which accompanied the commemoration was also very moving and included pieces by both staff and students including a haunting rendition by two of the teachers of ‘Christmas 1915’ which tells the story of the Christmas Day football match between the English and German trenches where for a brief interval amongst all the carnage there was peace, albeit short lived.
The service ended with the National Anthem and I can honestly say I have never been so proud of my country as I was today – We have come a long way and it is only right that we finally acknowledge our debt to those who gave their tomorrow for our today.

*Charles Arthur Cox, Royal Engineers, Scottish Regiment.
He died only weeks before the end of the war and is referred to in the official account below as Spr Cox:
During the night of 12/13 October 1918, 416th Field Company completed a floating bridge across the Sensée Canal, which allowed two companies of 1/2nd Londons to cross. At 05.15 one of these companies attacked under a covering barrage and surprised Aubigny-au-Bac, taking many German prisoners but the Germans counter-attacked the following morning, and the companies were withdrawn at dusk. That night a fresh patrol went across the footbridge, despite the Germans being within hand grenade range. The bridge broke, and Cpl James McPhie and Spr Cox, of 416th Fd Co jumped into the water to hold it together. McPhie and his men then set about repairing the bridge after daybreak, while under fire. McPhie and Cox were both mortally wounded, but the bridge held and the bridgehead was maintained until after 56th Division had been relieved by 4th Canadian Division on 14 October. Corporal McPhie was awarded a posthumous Victoria Cross.
The division then participated in the of the Sambre and finally the Passage of the Grande Honnelle, before the war was ended by the Armistice with .

Posted by Stephen Neill at 16:52 No comments: