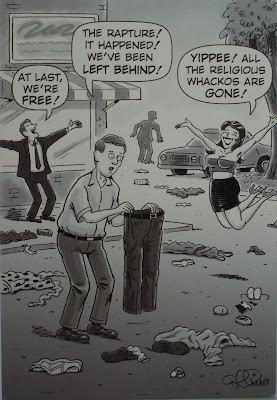 The line inside reads: 'Praise the Lord and have a Happy Birthday'
Posted by Stephen Neill at 18:33 9 comments:

A new beginning for Islam's relationship with the West? Obama makes a good start!

As soon as English paper 2 was opened in error yesterday in an exam centre in Co. Louth it was obvious that the paper was irreversibly compromised. In the age of social networking and text messaging the contents of the paper were nationwide as soon as the first students left the exam.
The question that I want to ask is this: Why is the reserve paper not more readily distributable? Surely working overnight this should have been possible! The resulting trauma to students is inexcusable. Listening to the radio this morning I hear that the 2 papers were the same colour! Perhaps the department might spend as much time on fine tuning the state exam system as they do churning out a steady stream of glossy brochures which serve little purpose but to add to landfill!
Posted by Stephen Neill at 08:16 5 comments: 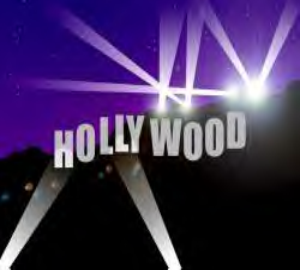 The Corrigan Brothers hit song - No one as Irish as Barack Obama - is to feature on a movie soundtrack for an upcoming film about the life of President Obama. The song was an online hit earlier this year and between cover versions and original performances has achieved over six million youtube hits. Click here to watch. Ger Corrigan lead singer of the Corrigan Brothers is delighted with their first piece of Hollywood exposure, "this is incredible exposure for our band, we are delighted, to have a song of ours on a movie soundtrack about President Obama is wonderful". The Corrigan Brothers have just released their first album "An Irish Man invented Rock and Roll" and will tour the UK, USA and Ireland in September and October.

A Day in the life of a 'Woman' 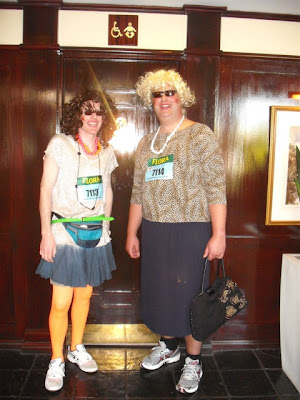 In the picture above you see me (on the right) with Ivor Hayes, school principal in Cloughjordan. He and I spent an interesting day on the recent Bank Holiday Monday disguised (convincingly you will surely agree) as members of the fair sex. They say if you want to get to know someone you should walk a mile in their shoes - We did better than that; we ran (staggered) 10K in their skirts - while participating in the Womens Mini Marathon. The day started when Ivor arrived at the rectory to get into his ensemble. He and I (Now Ivana & Patricia) then set off together (women do everything together) for Shinrone, a ten minute drive. All was going well until we were forced to stop when the road ahead was blocked by a tractor loading a trailer. Slowing to a crawl to negotiate the obstacle we waved cheerily at the bemused farmers who quite clearly were facinated and possibly disturbed by the sight they were witnessing.
Having met up with the bus we set off for Dublin. En route the rest of the girls looked after our makeup and tried to make us look even more stunning! Using lipstick as blusher we looked more like a couple of clowns! We stopped in Bewleys at Newlands Cross for breakfast and a toilet break, and here we faced a quandry - Ladies or Gents? The risk in the former was being arrested and in the latter getting a hammering from some more conventional gentlemen - so we played it safe and used the wheelchair toilet. Then after a full Irish it was time to head for the main event. The bus parked up just off Baggot St. and we walked up to Fitzwilliam Square where the event was due to start. This was the hardest part of the day - Despite an abundance of water stations we stood for over an hour waiting to start and quite literally roasted. The combination of 28 degrees and 40,000 hot bodies in close proximity was quite overwhelming. When the start came it was a huge relief! Finally we could move and get a little bit of space, not much but a bit. Our group (about a dozen) tried to stay together but that proved impossible as the race progressed. It was all you could do to avoid falling over your neighbour, such was the congestion and jostling at the beginning of the race. In places the road was melting underfoot and so not only was the Sun beating down unmercifully but the heat was also rising up to meet us from the tarmac. If it wern't for the frequent water stations and the fire hoses courtesy of Dublin Fire Brigade I don't think I could have made it. I had opted to carry my handbag throughout the race - no real woman leaves home without it - but it got heavier by the kilometre! Admittedly I did have a lot in it and like my wife I found I could never find my phone before it stopped ringing! Ivana and I reached the finish on Stephen's Green in 1 Hr 48 mins which considering the heat wasn't bad going. We collected our medals, though the woman who gave me mine challenged my gender - I can't imagine how she knew but when I offered to prove it she gave in hurridly and gave me my trophy! After that it was over to O'Donoghue's pub on Baggot St for a post race celebratory drink and comfort stop. Here again there was the quandry - which loo? Ladies or Gents? No middle-ground here! I opted for the gents and was met by a young woman coming out of the gents who apologised for trespassing but said 'have you seen the queue for the ladies?' I said I had and had opted for the gents for the same reason - For some reason this caused her to crack up laughing! After that it was time to head for the bus and the road home - It had been a good day and an interesting insight into the world of women.
Posted by Stephen Neill at 22:00 7 comments: 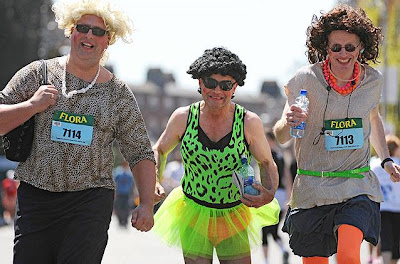 This from Evening Herald!

More pics to follow but in meantime a few more pics here
Posted by Stephen Neill at 08:14 1 comment: