The announcement over the weekend of the appointment of Dermot Dunne, currently the Archdeacon of Ferns, as the new Dean of Christ Church Cathedral Du

blin has created a lot of interest in the national media. This is largely it would seem because the new Dean is a former Roman Catholic priest and has risen through the ranks of the Church of Ireland very rapidly. However on reading his statement at the press conference following his appointment I came across something which if acted upon will be far more significant than his denominational transition.
In setting out his priorities the new Dean first acknowledges the excellent work of his two immediate predecessors Dean John Patterson and Dean Des Harman. Much of what the new Dean articulated in terms of the Cathedral’s spiritual role, its centrality in diocesan life and the rich heritage it brings to the capital city is not new but what was I think a new emphasis was this, and I quote:

“My wish is that be a place where people feel spiritua 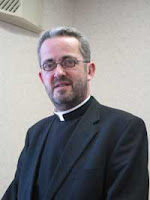 lly at home irrespective of their race, language, colour, gender, sexual orientation and faith expression. I want it to be a place where difference is celebrated and included.”

In saying this the new Dean strikes an exciting note for the future. Too often the have been seen as exclusive rather than inclusive communities. We have been fascinated with who is in and who is out and we have lost sight of the radical inclusiveness of the one whom we claim to follow. This appointment is GOOD NEWS!

Yes - Good to see someone with the right priorities in a position of potential influence. :-)

It's no wonder he left the Catholics. He sounds thoroughly unsuitable for an RC priest.