Night at the Movies

In the Hebrew Scriptures there is no word for "spiritual." And Jesus never used the phrase "spiritual life." 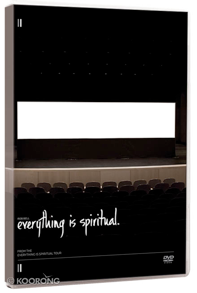 Why? Because for Jesus and his tradition, all of life is spiritual. Rob Bell explores what this means.

In cooperation with Cloughjordan Cine Club

For Directions: email me at stephen 'dot' neill 'at' gmail 'dot'com

I have met the speaker and seen this film and can recommend it as an excellent and thought provoking production. Not just of interest to those of faith, but also to doubters, agnostics and atheists. - This film makes an important contribution to the sacred/secular debate which is so much a part of Irish society today. Come along and see/hear a fresh perspective! Why not go for a pint afterwards and continue the debate?

From Belfast to Limerick - New Sherrif in Town

I've got a new boss. This from the Church of Ireland Website:

It was announced today that the Episcopal Electoral College for Limerick and Killaloe, meeting in Christ Church Cathedral, Dublin has elected the Revd Canon Trevor Williams, Rector of Holy Trinity and St Silas with Immanuel parish in North Belfast as the new Bishop of Limerick and Killaloe. The Revd Canon Trevor Williams (59) was born in Dublin in 1948 and educated in St Andrew’s College, Dublin, Trinity College, Dublin and St John’s College Nottingham. He was ordained a deacon in 1974 and a priest the following year and first served as Curate in Maindenhead, St Andrews and St Mary’s in the Diocese of Oxford from 1974 to 1977. He moved to Ireland to become Assistant Chaplain to the Queen’s University of Belfast in 1978 before going on to serve as Religious Broadcasting Producer with the BBC from 1981-1988. From 1988 to 1993 he served as Rector of St John’s, Newcastle, Co Down. In 1993 he became leader of the Corrymeela Community, an ecumenical Christian group committed to promoting peace and reconciliation in Northern Ireland. He was appointed a Canon of St Patrick’s Cathedral in 2002. Since 2003 the Revd Canon Trevor Williams has been serving as Rector of Holy Trinity and St Silas with Immanuel in North Belfast (Diocese of Connor).

Canon Williams retains an active interest in working for reconciliation in Northern Ireland. He recently joined with four other protestant clergymen from North Belfast in urging the Northern Ireland Executive to put more resources into addressing sectarianism in its Programme for Government.

He is married to Joyce (nee Milne) and they have three adult sons, Andrew, Mark and Michael. Joyce works as an administrator with the Churches Community Work Alliance.

Reacting to his appointment, the Revd Canon Trevor Williams said that he was “surprised and delighted to be offered the opportunity of serving the people of the United Dioceses of Limerick and Killaloe. I’ve really enjoyed my time here in North Belfast and I’d like to thank the people here for their warm and generous welcome.”

Following approval by the House of Bishops, the Bishop-elect will be consecrated in Christ Church Cathedral, Dublin on a date to be determined. On separate dates also to be determined he will be enthroned in the two Cathedral churches in the Dioceses. St Mary’s Cathedral, Limerick and St Flannan’s Cathedral, Killaloe. Until his consecration, pastoral responsibility for the Diocese remains with the Archbishop of Dublin, the Most Revd Dr John Neill, with the Venerable Wayne Carney, Archdeacon of Killaloe acting as his commissary. 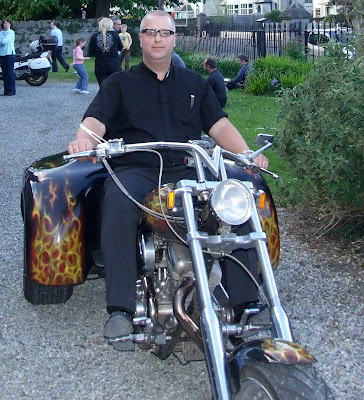 Yours truly! - yesterday afternoon. An online buddy of mine is a biker priest from Northern Ireland and he and twenty of his comrades came visiting yesterday evening for a pit stop and much needed sangwidges en route to Kilkenny. They were doing the tour for Down's Syndrome Ireland and created quite a spectacle when they rumbled into Nenagh. 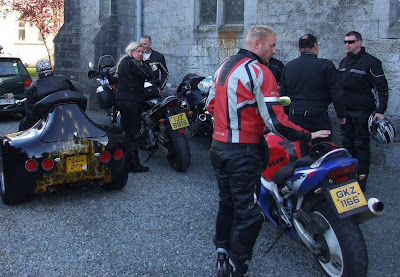 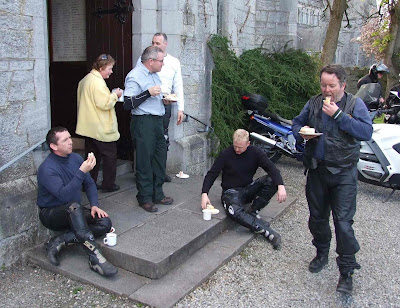 I can see how people get the bug for biking - there is no sound quite like 20 high powered bikes all starting up together - If it wasn't for the fact it is so bloody dangerous I would love to have a go. One can but dream....

Forgive me Father for I have sinned - It has been 3 weeks since my last blog post!

Fellow blogger, Bock the Robber, (not my father!) has been on my case about my blogstapation and rightly so. Then I got an email today from GUBU (Sarah Carey) about my call to Joe Duffy's Liveline this week - Apparently it was reprised on Playback (show of 3rd May 08) this morning. So I thought if I was fired up enough to phone Joe Duffy surely I could put a few words together for the blog. So here it is:

What got me so worked up that I called Joe Duffy?

Well he had Fr Pat Bradley, a Dublin based priest, on the show. Fr Pat had put his head above the parapet and suffered the consequences. He had written a character reference letter to a judge who was deliberating on the sentencing of a young man who had violently and repeatedly raped a polish girl in the grounds of a church. It was a horrible crime and one can only hope that the victim can rescue something of her shattered life in the future. That said, Fr Bradley’s angle was that this attack was out of character for the perpetrator, who he knew quite well. He felt that the Judge should have all the facts at his disposal in arriving at a just sentence. He was not looking for acquittal or undue leniency, but simply justice. He felt that the young man deserved a lengthy sentence, as did his own mother so there was no question of belittling the crime or the victim.

Well predictably enough his intervention was not well received by Joe Public! Fr Bradley found himself at the receiving end of a tide of vitriol and hatred from a succession of callers who all claimed to be Christian and yet insisted that the perpetrator was beyond the scope of Christian forgiveness. If the callers had not argued from a Christian perspective and simply attacked the Christian notion of forgiveness then their arguments would have had some integrity but to argue that Christian forgiveness is limited is a denial of basic Christianity. One caller who explicitly declared herself a Christian said she would place a hex (curse) on Fr. Pat for his intervention!

It is clear that there was a lot of anger in the contributions and in some cases that was understandable, particularly where family members had been victims of similar crimes. However for the most part it seemed to be more a case of self-righteous anger and perhaps thinly veiled anti-clericalism. In the light of some of the events in various religious institutions, that in itself is not surprising but it does muddy a very serious issue. Is every sexual offender really totally beyond hope of recovery / redemption / forgiveness? Are all sexual crimes equivalent? Should we just lock the door and throw away the key? If you were to take a poll of the callers to Liveline it would seem that that would be the consensus. Of course that is the easy option because it means that we do not have to confront the possibility that society (our society) plays a part in the increasing levels of violence against not only women but men and women, children and senior-citizens alike!

It seemed to me and I said as much that a lot of the callers were looking for vengeance rather than justice! It is not specifically Christian wisdom to point out that vengeance damages the victim more than the perpetrator – most psychologists would agree. It is unrealistic to expect overnight forgiveness but whatever you call it, people have to let go of hurt eventually or it will consume them. Forgiveness is not forgetting – it is rather saying that your actions will no longer determine my life! Forgiveness does not mean that no punishment is appropriate but it does insist on justice, not revenge!

I think that Fr Pat was representing very faithfully the cutting edge of the Gospel, what I referred to as ‘Hard Gospel’ (a phrase very popular in my own church at the moment). The Gospel is not something tidy or polite or inoffensive. It is disturbing and disruptive and very often swims against the tide of public opinion, as did Jesus! The Gospel is not about popularity or mob rule but rather about justice, compassion and love, the last of which is the most volatile and uncontrollable force in our lives.

One of the phrases I used in my defence of Fr Pat was that we are “not the sum total of our worst acts” but sadly that is how we seem to respond to the criminal element in our midst. We are fundamentalists when it comes to categorising people today: They are good or they are bad, when of course the truth is that we live in a world of shades of grey.

We are all of us capable of the most unspeakable acts of depravity and yet we are also capable of the most beautiful acts of Love. That is what I means to be a human being in all of our extraordinary and terrifying complexity. Just as it could be our beautiful daughter who is raped it could equally be our precious son who commits the ‘unforgiveable’ act! Are we really as bad as our worst act? I hope not because it presents a bleak future for humanity! The traditional understanding of ‘The Fall’ in Genesis probably has played a part in this fatalistic view of humanity but that is something for another posting……….
Posted by Stephen Neill at 18:25 18 comments: